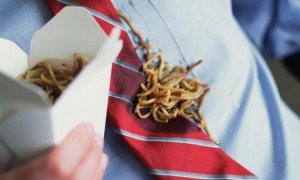 It is commonly believed  that club soda is the ultimate remedy for instant stain removal, but is it really true? Flair turned to our 107-year-old professional trade association, the Drycleaning & Laundry Institute, which undertook an in-depth study of the merits of club soda versus plain old water for stain removal.

Here are the results!  Club soda can be a big help with stain removal in the short term, but it is not the “perfect” stain remover some people think it is.

When applied immediately to 10 ordinary food stains DLI found that some or most visible traces of the substance were removed; however, an analysis under ultraviolet light showed that at least a portion of nearly every stain remained after club soda or water was used remained. The study showed that the remaining stain residues became permanent stains when the garment was washed, cleaned or simply over time. In fact, using these treatments on some garments actually set the stain, making it impossible to remove even with dry cleaning.

The study showed that club soda actually made some stains worse, for example ballpoint pen ink, which is made up of water and solvent components. If water or club soda is used to remove this kind of stain, it will more often than not, set the stain permanently into the fabric.

The best course of action is to take the garment to Flair where we can try to remove all traces of any stain completely. Show us where the stain is, tell us what caused it, and let us know what you did to try to clean it.

Welcome to Living with Flair, the official blog of Flair Cleaners. New to our blog? In a nutshell, we are Southern California’s leading eco-friendly dry cleaning business and we’re passionate about clothing, our community, and our environment. END_OF_DOCUMENT_TOKEN_TO_BE_REPLACED

Our blog is intended to help us all live life with Flair, by providing tips, ideas, and useful information, as well as to share some of the exciting things going on in our stores and our community. See something you like? Be sure to share it with your friends.